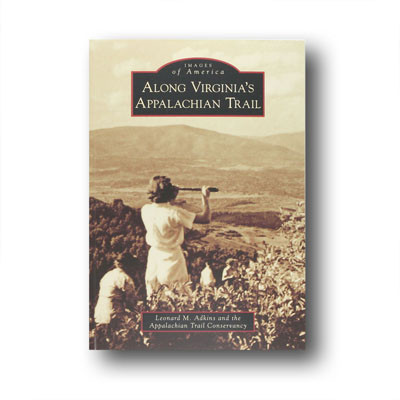 More than 200 vintage photographs (most never-before-published) from the archives of ATC and the Virginia clubs – a look at life in the Appalachians before and during the Trail's creation and at the volunteers who developed and maintain it. This is part of Arcadia Publishing's well-known Images of America series. Leonard M. Adkins is well-acquainted with the Trail having hiked its entire length five times, as well as assisting the ATC as a Natural Heritage monitor, ridge runner, and serving on the boards of directors for two Trail clubs. He also received the 25-year volunteer award from the ATC.

Approximately one-fourth of the Georgia-to-Maine pathway passes through Virginia, going across some of the state’s best mountain scenery and affording access to small-town life. The trail was, and still is, primarily built, maintained, and overseen by volunteers. Selected from the archives of the Appalachian Trail Conservancy, the National Park Service, and local Appalachian Trail maintenance clubs, the approximately 200 photographs in Images of America Along Virginia’s Appalachian Trail provide a look at life in the mountains before and during the trail’s creation, how it developed, who its early champions were, the many relocations the trail has experienced, and the volunteers who have constructed and maintained it.