Along the Appalachian Trail in West Virginia, Maryland and Pennsylvania 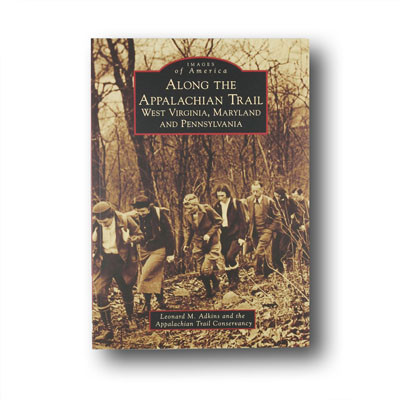 Along the Appalachian Trail in West Virginia, Maryland and Pennsylvania

Leonard M. Adkins is well-acquainted with the Trail having hiked its entire length five times, as well as assisting the ATC as a Natural Heritage monitor, ridge runner, and serving on the boards of directors for two Trail clubs. He also received the 25-year volunteer award from the ATC.

Unlike counterparts on other sections of the 2,18-plus-mile Appalachian Trail, who could locate the pathway within national parks and forests, builders of the 270 miles of trail detailed in Along the Appalachian Trail: West Virginia, Maryland, and Pennsylvania did not have vast tracts of federal lands on which to construct the footpath. Yet they succeeded in creating a trail within many of the states' scenic areas. Hundreds of vintage photographs – provided by the Appalachian Trail Conservancy, National Park Service, state archives, and local trail-maintaining clubs – present an illustrated narrative of the Herculean work and dedication it took for volunteers to plan, build, and continue to maintain the trail in these states. Included are the glimpses of American history the trail passes by, the pathway's early (and later) supporters and hikers, and original locations that have been rerouted off of today's trail.