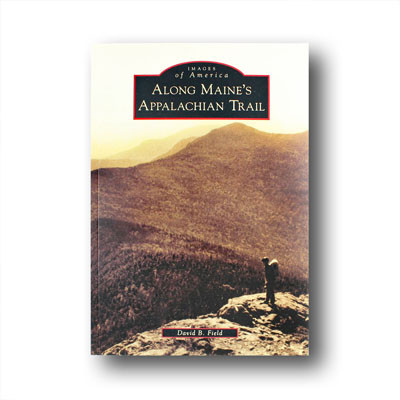 Along Maine’s Appalachian Trail captures the rich history of the Appalachian Trail through Maine, the last stretch to be blazed in the 1930’s, in about 200 photos. Photos and descriptions of what is considered by many the toughest and most rewarding portion of the Trail, were gathered by Dave Field. Field is the living expert on Maine’s Trail who served as a Trail volunteer since the 1950’s, on the ATC board as chair for almost three decades, and as a Forest Resources professor. The photos were pulled from his personal collection, Maine A.T. Club archives, and Maine State Library archives – much of which came from the ATC.

Maine native Myron H. Avery recruited friends from Washington, DC; Maine forest and warden service personnel; guides and sporting camp operators; and the Civilian Conservation Corps to extend the Appalachian Trail through Maine, despite questions of whether it would be possible to carve a trail through the state's wildlands. Volunteers of Maine’s Appalachian Trail Club, created by Avery in 1935, have since maintained the trail, built shelters, relocated more than half of the original hastily constructed route, and taken on the task of managing the trail’s protection corridor.

Along Main’es Appalachian Trail illustrates the rich history of the trail’s rugged mountains and vast forests, which have provided a livelihood for generations of workers and communities.