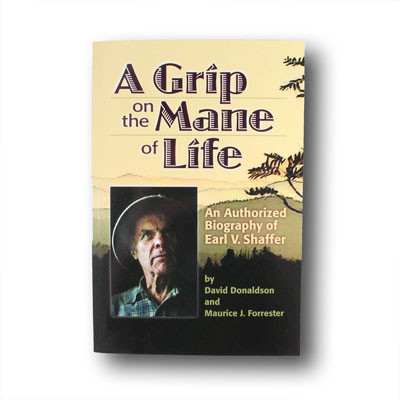 An authorized biography of Earl V. Shaffer, A Grip on the Mane of Life is the first full look at the thru-hiking pioneer's varied interests and approaches to life. Written by two men who knew him, and the A.T., well. Donaldson and Shaffer met in 1988, during Donaldson’s first thru-hike and Earl’s third, where they finished the Trail together. Forrester and Shaffer met in 1972, and crossed paths often at other Trail-related events. Forrester served as Treasurer and Board member of the Appalachian Trail Conference, later to become the Appalachian Trail Conservancy.

After what one would think was already a full and productive life, Earl had yet another dream – his grand finale. In 1988, Earl decided to celebrate the fiftieth anniversary of his first A.T. thru-hike by doing an encore. Just a few weeks shy of his eightieth birthday Earl Shaffer climbed yet again to the crest of Maine’s mile-high mountain, Katahdin, whereupon the Appalachian Trail icon became an national legend.