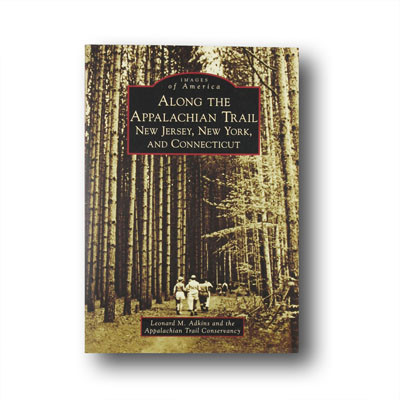 Along the Appalachian Trail: New Jersey, New York, and Connecticut is a look at the rural areas outside the New York metropolis before and during the Trail's creation and at the volunteers who developed and maintain it. These states are where the Trail truly had its start as a separate entity. Leonard M. Adkins collected the more than 200 vintage photographs (most never before published) from the archives of ATC, the New York-New Jersey Trail Conference, Connecticut AMC, and state agencies. Leonard M. Adkins is well-acquainted with the Trail having hiked its entire length five times, as well as assisting the ATC as a Natural Heritage monitor, ridge runner, and serving on the boards of directors for two Trail clubs. He also received the 25-year volunteer award from the ATC.

The area is considered by some to be the pathway’s birthplace, for in 1923, just two years after Benton MacKaye originally proposed the Trail, the first few miles specifically constructed for the Appalachian Trail were built by volunteers in New York’s Harriman and Bear Mountain State Parks. These photographs and the corresponding narrative present a historical perspective on what it took to create the trail, including thousands of volunteers and the arduous tasks they performed, those who lived along the trail before and during its creation, the many people who have enjoyed the trail through the years, and the original routes that are no longer part of the present-day Appalachian Trail.

This is part of Arcadia Publishing's well-known Images of America series.